Why Russian Hackers Are Doing the US a Favor

Colin Powell’s hacked email once again showcases that what people in office tell us and what they actually think are two very different things.

Politicians work for us — we are supposedly their employers. Yet we seem to know far less about what they do and think than what we need to know in order to vote intelligently. Powell’s comments are actually far more damaging to Clinton than Trump, because he knows and has worked with Clinton and refers to her as a friend. Clearly, if it were it up to him, neither of them would be considered for president.

In technology, particularly as we move from analytics to artificial intelligence, one of the most critical elements is data integrity. It is a common belief that if we create an artificial intelligence that kills us, it likely will be due to a mistake — like failing to ensure the quality of the information and training it gets.

Skynet in the Terminator movies in effect is the result of bad programming. Its training led it to determine that humans were the problem it had to solve — with prejudice.

I’ll share some thoughts on why Russia likely is doing the U.S. a favor — albeit unintentionally — by hacking into political email. I’ll close with my product of the week: an iPhone app that could help you vote smarter.

One of the biggest problems we have with our government is transparency. Politicians seem to find it far more convenient to lie to us than to tell us the truth. This very common practice should invalidate them for the job — much as it would in the case of any employee who came to work and fabricated answers to questions asked. You can’t make a proper decision on highly inaccurate data.

A number of presidents have run on the idea of transparency, with President Obama likely the most vocal about this requirement. Ironically, it seems not only true that these people are less than transparent in office, but also — and the current President is a case in point — that the more they yell “transparency,” the less transparent they actually are.

For instance, both Chelsea Manning (born Bradley Manning) and Eric Snowden were pilloried and criminalized for releasing confidential information that showcased that the U.S. was behaving illegally. They were punished far more severely for their leaks than the folks they turned in — who actually were behaving criminally.

Further, it appears there has been little or no effort to fix the core problem, which is the lack of a secure process that would let someone report a government crime without being criminalized themselves. So it actually is easier to commit a crime as a government employee now than it was before Manning and Snowden, because now those who may be thinking of reporting the crime know they will be the ones arrested.

So we have a huge bipartisan problem: Government officials don’t tell us the truth, and they arrest those who catch them behaving criminally. Oh, and those who run the government aren’t who we think they are.

If the information being disseminated is intentionally false, we have a huge problem as we move toward deep learning systems and, particularly, artificial intelligence. That’s because these systems will be brought up with information that is known to be false, and thus will be corrupted by it.

As our government deploys them, these systems — which act at the speed of light — will attempt to address false problems with well-formed and researched responses. Given that the actual problems either don’t exist or are defined inaccurately, there is virtually no way that what these systems do will make the real problems go away. Often, it will make them worse.

These are learning machines, though, and unlike people — who often don’t admit mistakes and thus don’t learn or grow from them — learning systems are designed to view a mistake as a learning experience. They are programmed to define a mistake as a problem, and learn to fix it.

The fix may well be to eliminate the source of the error — which would be the humans in the decision path who were lying. “Eliminate” could range from bypassing them as a source to the more draconian meaning, which would be the Terminator scenario that a lot of us continue to worry about.

In short, the old “garbage in, garbage out” adage for databases has a whole different meaning when we are talking about systems that could control everything from utilities and services to law enforcement and defense.

Given that Russia isn’t exactly known for being truthful, this is highly ironic, but its leaks of otherwise confidential email slowly are forcing the political powers-that-be to realize that nothing is private — that regardless of how private they want to be, they will be made transparent.

If this continues, it will force a change in behavior, because every successful politician knows that it is far better to release bad information proactively than to have it leaked or released by a rival. It troubles me a bit that Clinton in particular doesn’t seem to be learning this, because it threatens the entire premise, but I think that even she will have to adapt if her private information continues to become public.

The threat of disclosure will force politicians to reconsider how they think, how they talk, and particularly what they reveal, and it should allow those who are naturally honest and in line with what their constituencies believe to outperform those who aren’t.

That’s because maintaining a lie with that level of transparency — while not impossible — is exceedingly difficult. It’s similar to someone who is a natural in a sport outperforming better-trained competitors. If truth coupled with good behavior becomes a winning formula, it has the potential to raise all boats.

A lot of us are concerned about the coming wave of AI systems. A good deal of our concern is based on the belief that those controlling critical systems — whether they’re natural ecosystems or defense — will come to conclude that the world they’re interacting with isn’t the real world. To get to the real world and make successful decisions, they’ll need to eliminate the problem.

Right now, the people who lead our countries are the problem, and if we can get them to become truthful and honest, we not only will be more likely to avoid what could be a catastrophic outcome, but also could help turn what is clearly a dysfunctional government into one that actually works. Ironically, that likely would not be in Russia’s best interests, but I’m actually OK with that.

I got a call from these folks before the launch, and I was so impressed with the effort I provided some launch support. That’s because I believe very strongly that we are in the mess we are in because we don’t make wiser political choices.

The Contempo political app by Aleya Labs, which is integrated with Rock the Vote, mines a variety of news services for political articles, ranking them by importance. If you you swipe to the right, you will get news coverage consistent with conservative beliefs. If you swipe to the left, you will see coverage consistent with a liberal perspective. 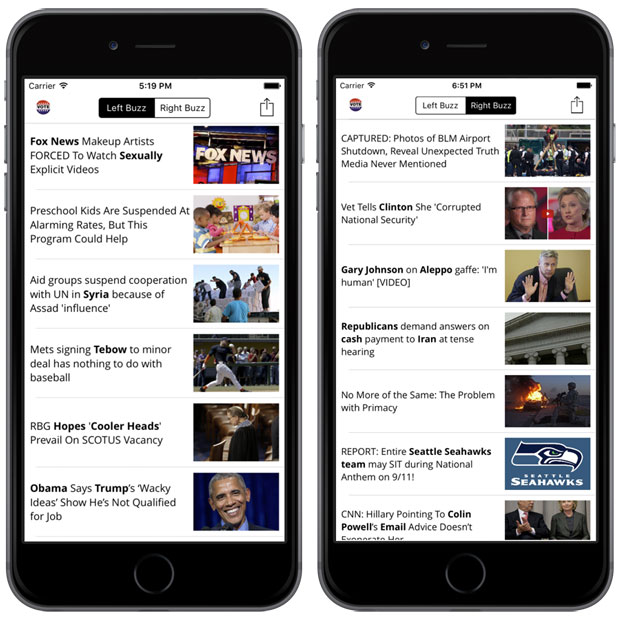 What the folks who built Contempo discovered is that conservatives and liberals actually see very different stories and form their opinions on very different views of the world. With this app, you can see not only news that makes you comfortable, but also news that makes you uncomfortable. You can at least have an opportunity to better understand those who disagree with you — and maybe, at times, agree that their position may be stronger than yours.

It helps you cut through the BS and get to what is important more quickly. In any event, it allows for a better understanding of the differences between positions, and it may be a strong tool for limiting the degree to which your views might be manipulated either by the left or the right.

I personally believe that the informed voter is critical to our ability to elect far more qualified representatives, and that we desperately need them in these jobs so we can stop complaining about problems and start actually fixing them. I also think this is yet another tool that can be used to limit the effectiveness of lies from any politician.

Since I believe apps like Contempo will result in a better world (currently on iOS only, but Android is coming) it is my product of the week.

Trump Sticks to His Personal Phone Despite Security...